By Abbie Langston and Lorrie Chang

Letcher County, Kentucky is at the very heart of Appalachia, a region as rich in history and culture as in natural resources. Over the last 10 years, the county has lost more than 90 percent of coal jobs that had sustained its economy. About 98 percent of residents are White and 80 percent voted for Donald Trump in 2016.

At first glance, this rural area might seem to have little in common with diverse urban centers like Detroit and Pittsburgh. But the challenge of advancing a just economic transition in coal country is not dissimilar  with the challenge of building an equitable economy in metropolitan regions once dominated by steel, automotive, or other manufacturing sectors.

Like these cities and other “company towns,” Eastern Kentucky citizens once drew their lifeblood from a single industry, and now face the challenge of charting a new economy. One resident likened coal’s hold to addiction. The coal companies proclaimed, “you mine the coal and we’ll take care of you,” she explained. When coal collapsed, this dependency left communities in fear and desperation. So it’s no surprise that many residents have welcomed the prospect of a proposed federal prison as another economic anchor to fill the void.

But across the political spectrum, a consensus is building that Letcher County’s future cannot depend solely on one company or industry. A group of community-led organizations have formed the Letcher County Culture Hub, a network designed to foster and develop residents’s agency and assets, and build on the strength of its own rich cultural wealth. Today the growing list of partners include volunteer fire departments, businesses, community centers, and artist and cultural organizations collaborating with elected officials and other local, regional, and national organizations. Partners bring together resources and work in consensus to pursue common goals including reviving cultural events like the region’s bluegrass festival, founding new social enterprises including one that employs formerly incarcerated people, and expanding opportunity such as broadband Internet.

The Letcher County Culture Hub is also a part of the Arts, Culture, Equitable Development Initiative, generously supported by The Kresge Foundation, for PolicyLink to expand the impact of six community based organizations across the US in equitable development and policy change through arts and culture.

The Letcher County Culture Hub was born out of Appalshop, a 50-year-old multimedia arts, culture, and workforce development center that supports residents to tell their own stories, strengthen Appalachian culture, and work for more just communities.

With its arts-and-culture focused mission and deep roots in Letcher County, Appalshop took a unique approach to economic development: unlike traditional development that begin with a plan for a community to develop assets, they began with the community and the assets within it. Ben Fink, an Appalshop organizer who collaborated with community leaders to start the Culture Hub, explained, “This isn’t a project about saving Appalachia. This is a project about Appalachians saving ourselves.” From this perspective, culture isn’t just a way to add local flavor to economic development or market products; it is the very context and medium that make economic and social relationships possible. As Fink put it, “culture means more than music, dance, or art. It means paying attention to the language, interactions, and how meaning gets made.”

For the Culture Hub, starting with culture means starting with the methodology of story circles utilized by Appalshop’s longtime collaborator Junebug Productions, an African-American arts organization rooted in the civil rights movement. Story circles create a space where all voices are equal, identify and build on common bonds, and generate ideas from the intersections and contradictions between stories.

This has been a crucial process for the Culture Hub whose constituents span a wide spectrum of philosophical beliefs and political leanings. Fire chief, former mine owner, and conservative political activist Bill Meade reflected, “If you told me I would be here at Appalshop three years ago, I would have never believed you.” Appalshop has long been viewed by some with skepticism for its progressive political orientation in a place steeped in conservative traditions. But by building from the common ground of culture, the Culture Hub has bridged long-standing divides and forged new bonds of collaboration. Story circles, community plays, and other cultural-based approaches have allowed participants to not ignore their differences, but to work across them through shared values and aspirations. Meade, a founding member, is now one of the network’s central leaders. He has played an integral role in economic development, helping launch the county’s first large-scale solar project with partners; and the arts, playing a lead role in Appalshop’s recent play The Future of Letcher County.

Playing the Long Game: Rooting Culture in an Economic Model

For over a hundred years, Appalachia has been dominated by an economic model that suffocates rather than encourages creativity, new ideas, and self-determination. The Culture Hub’s vision for the next hundred years is very different: build a culture of entrepreneurial spirit, interdependence, and unbounded imagination among residents who believe the future is theirs to create. This is why their mission is not just job creation or economic development. Instead, it is guided by the broader principle, “We own what me make.” The goal isn’t to employ everyone; but to create the conditions for everyone to enact their cultural, civic, and economic agency; identify and build on their assets; and find self-directed ways to turn them into community wealth. 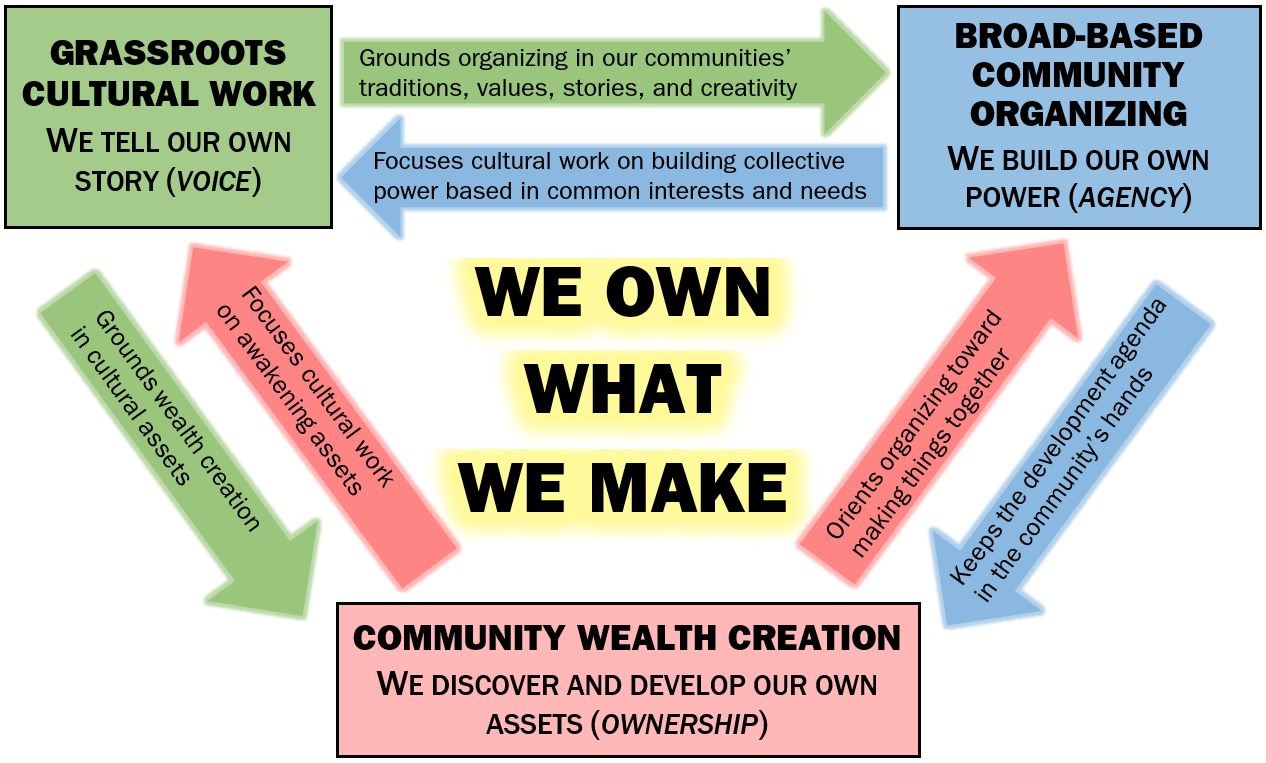 The Culture Hub is playing the long game to redefine who owns and designs the narratives, strategies, and policies that will define Appalachia’s economic transition. Policies or programs alone cannot achieve true equity — a society in which all can reach their full potential — without shifting the culture of how people relate and make meaning and value together.

By building trust and a common voice through the intentional, collective production of culture, participants recognize and act on opportunities and needs in ways that might not be possible in traditional planning processes. As Fink explained, “honestly I think there was some shame about, you know, feeling helpless…[These deeper opportunities and needs weren’t] going to come up but for the kind of really intentional work around relationship building and strengthening that we did.” Because the Culture Hub roots development in people and their stories, participants are able to “not only to tell a different story about themselves, but also to act on that story”. Residents can rewrite their story from helpless to empowered and shape the solutions that turn this story into reality. 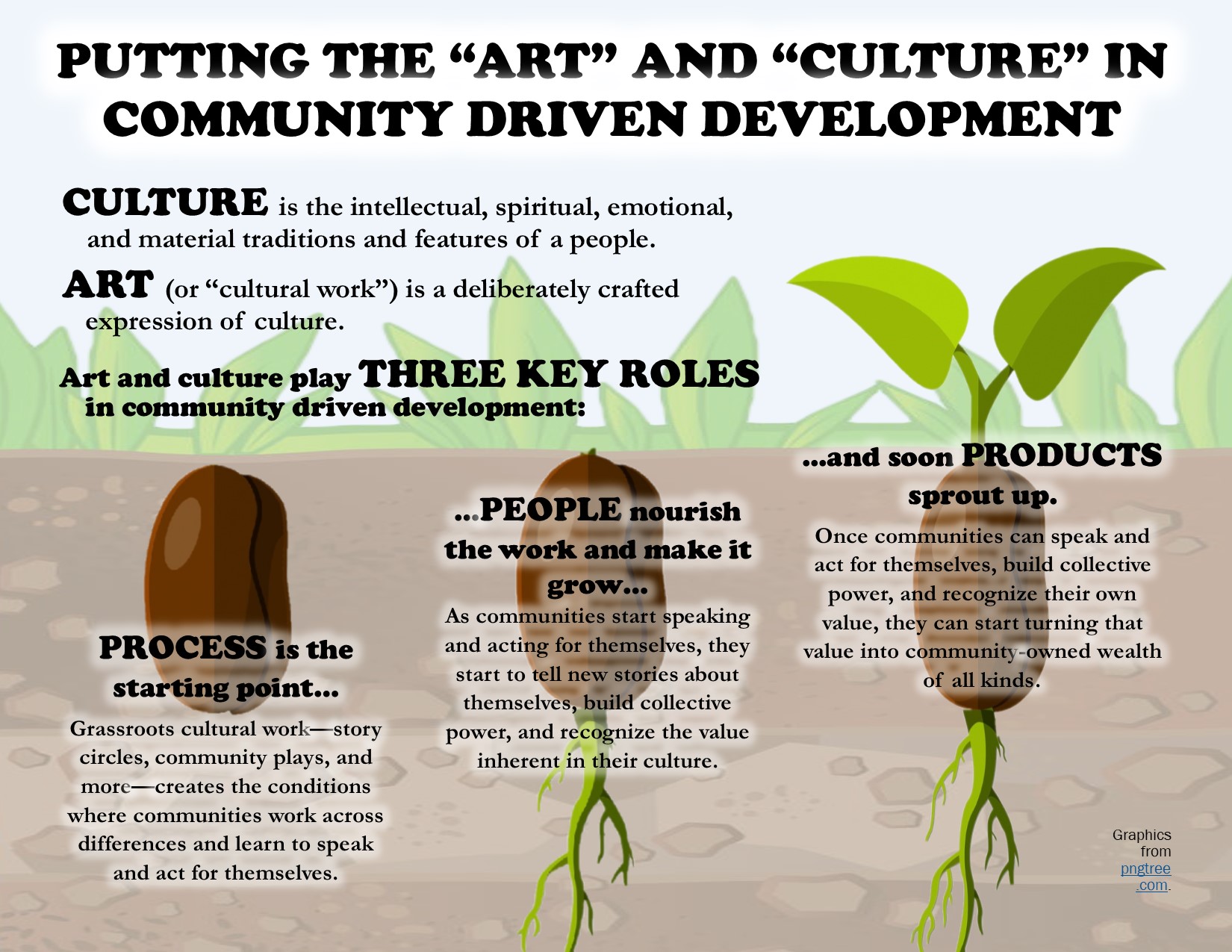 The Culture Hub is expanding. What began in 2015 with four partners is now nearly 20. Furthermore, the Culture Hub joined community cultural organizations in the Black Belt of Alabama, Mississippi Delta, West Baltimore, and rural and urban Wisconsin to found an emerging coalition. This project, called Performing Our Future, brings grassroots partners alongside economists, researchers, and technology developers together to advance community-led, culture-driven development on a national and international scale. The Culture Hub and the coalition continue to look for collaborators and funding to support work in which all people, voices, and perspectives make their own future and own what they make.