When I was a kid, my Chinese parents used to say to me (as they sat me in front of my homework while my white friends were out playing), “You not White!  You work twice as hard to be equal!”  That just made me roll my eyes at their naïveté.  After all, this was America, the land of equality.

Fast forward to becoming a single mother looking for work. My college degree didn’t help in the small town where I was living, so nearly a year into my search, I decide to apply for a job at Dunkin’ Donuts.  The manager interviewing me said with a gleam in his eye, “You Chinese are good workers, aren’t you?”  And suddenly, the light dawned:  it was me, not my immigrant parents, who was naïve and I would indeed be expected to work twice as hard as the other “girls” for the same pay.  I later discovered that many other children of color had gotten the same message from their parents.

My parents experienced racial politics before the Civil Rights era.  So “twice as hard” must be past history, right? Didn’t we solve racial inequality in the 1960’s, or at least begin closing the gap with all deliberate speed? Well, no! The inconvenient truth is that while the income gap between Whites and African-Americans has narrowed somewhat — Black income has inched up to 65 cents to the White dollar — the Black/White wealth gap quadrupled over the last generation, according to a study that followed the same families between 1984 and 2007.  If you lined up the Black families and the White families in the study by the amount of wealth they held, the White family had $100,000 more than the Black family. Not only that, but by 2007, higher-income African Americans had less wealth than middle-income White Americans. 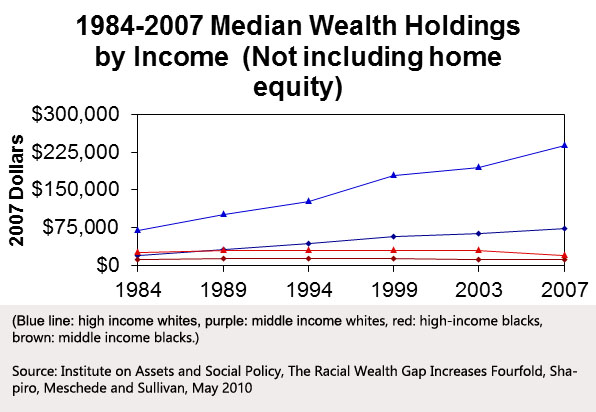 And the “Great Recession” made it worse.

By 2010, while the typical family in every racial group had lost ground (with income and wealth growth benefiting only those in the top 1 percent), people of color had lost more than their White counterparts. The typical African-American family now has just a nickel for the dollar owned by White families, Latinos have seven cents, and Asian Americans have seventy cents. 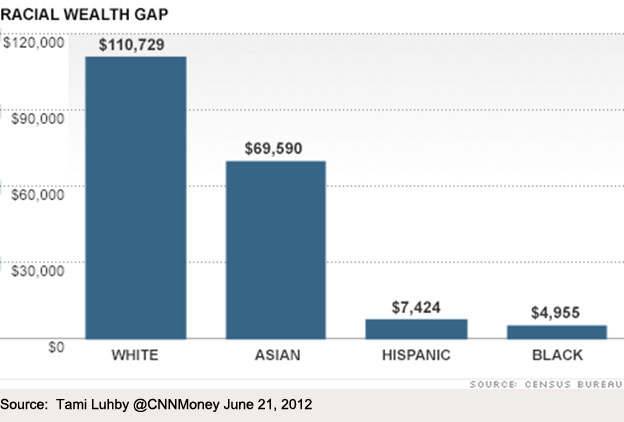 It is the inequality of wealth that is the key that unlocks the mystery of the persistence of the racial economic gaps that are with us today.  Owning assets means you can weather financial storms, live in neighborhoods of opportunity, invest so that your money will grow, stop working when you’re old, and give your children a jump start on their own lives. Just think how many more options a family has with an extra $100,000!  And when it is mainly White families who have passed and will pass those extra assets along generation after generation, the racial divide inevitably continues to be the dominant feature of our economic and social landscape.

But why such big gaps? Some believe that we now have a color-blind society, so lacking resources must be the person’s own fault.  Others cite continuing prejudice leading to discrimination as the reason for the gap.  Both of those rationales place the responsibility on individual attitudes and behaviors.  Both miss the mark.  Over the course of U.S. history, governmental policies have been responsible for creating the inequality that is a blight on our democracy and economy.

Land and access to natural resources, the basis of all production — and therefore wealth —were taken away by force and fraud from the American IndianS by the colonists from Europe.  The enslavement of Africans meant that they could not own anything, nor even earn an income: they themselves were counted as financial assets by their owners, just as stocks are counted by the wealthy today.  The U.S. invaded Mexico in 1846 because they wanted to expand, and expand they did. Through conquest, two-thirds of Mexico was annexed at the end of the war in 1848.  While the Statue of Liberty beckoned to immigrants from Europe, her light was turned off for those coming from Asia:  only Whites could become citizens and enjoy rights, including the right to ownership.

“Work twice as hard to be equal” was stated to me as a simple fact.  The fact is that racial inequality, like race itself, is a reality created by the policies of the U.S. government.  But if one equals one for Whites, and if we believe that all people are created equal, should two equal one for non-whites?  That’s bad math.  That’s bad policy.  And that’s bad for our nation’s economy and democracy as a whole.

This post was written by Meizhu Lui, co-author of The Color of Wealth: The Story Behind the U.S. Racial Wealth Divide